This is Noam, my elder.

I told him: focus on your stop, and let the loop happen. Then I returned to the big boys’ business (there was a shootout going on). Happily, someone with her priorities better sorted than mine took a couple of pictures (let Isabelle be wholeheartedly thanked here).

He was doing really good on his own, boy I’m so proud.

I’m building a sweet 6’6 3wt that will be a better match to his arm.

So, as you may have gathered if you paid attention, I’m currently building a 4wt rod. After having derived so much pleasure for so little money with the MHX F906, and since 1. a 6wt is often overkill in France, 2. my old 4wt is a little lackluster after years of inconsiderate abuse, I decided I just had to give the F904 a go.

First contact. The blank is straight enough. Not absolute straight, but good. There’s a cosmetic blemish on one of the pieces, as if someone had smeared a little epoxy on it. Not cool, MHX! Still, good overall.

Wiggle. As I came to expect from those blank, very fast, very light. Low MoI**, and it seems quite stable (no tip bounce). I expect it to yield a fantastic rod.

For the handle design, and overall feel, I wanted to end up with something looking somewhat traditional but not boring. I also wanted a grip that would give me all the control I could get. Not being one to avoid experiments, I tried the grip a lot while sanding it, and found that a rather large one seemed to allow for a finer control. Extensive field tests will wait for the finish to cure, but I like it for now. I have relatively large hands, but not that big either. Largest diameter of the cork is 3.2cm (1 1/4 in.). It looks sturdy, quite the opposite of those superfine jobs you usually find on a 4wt, which is fine for me.

Batson Y reel seat is quite a fine piece, but the insert gave me some trouble. It was supposed to be a light burl, but the color happened to be more honey-brown or something. Finding a matching thread was not easy. I ended up buying embroidery thread: Mettler Polysheen, which has a fantastic color range (435 tones). Not sure how it would react to the finish, I bought 3 spools: 0851 (Old Gold), 0941 (Golden Grain) and 1342 (Rust).

hard to get the exact original color. the thread is more shiny, the tone more subtle. really gorgeous

I did a first test with Flex Coat (quite a messy job, hand turned a couple of times then forgotten, just a color test ^_^). Results indicated a clear need for color preserver: 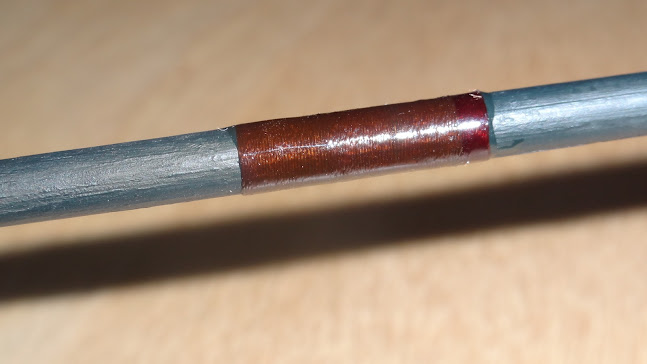 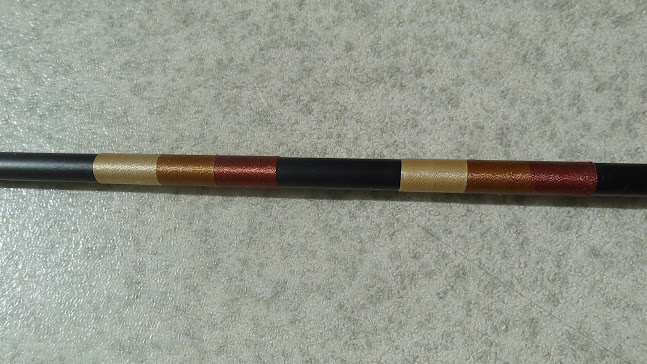 Finally, I decided that the Golden Grain was the best match for the burl insert. I won’t insist on the signing, it’s in the previous post.

Now that all the wraps are done, I’ll just have to finish building the rod dryer, and put some finish on the rod. I’m not sure yet if I want to use Flex Coat or Permagloss. Slightly partial to PG though.

Erin, who’s doing it all very right, felt deep things while doing it. She says

And then I switch out for my rod, and write my name very slowly, and thoughtfully on the flat below I pen the length and weight and taper. My hand begins to shake a little bit. Then the month and year — I’m nervous — whereupon I have the secret hope that several hundred years from now someone will find this rod in an attic, or woodshed, or closet with a secret door, and will wonder who Erin Block was — maybe they’ll Google me once or twice, if people are still Googling in 2413  — and then they’ll marvel at how long ago 2012 was. That is what I hope – that this rod, that these words, will someday prove that I existed. That I lived and loved and lost. And died. And that I was glad to go, but sad to leave.

But then, she was building a cane rod, so it’s OK to go all spiritual about it, there must be something in cane dust that makes you feel that way. Obviously, that wouldn’t do for me. Not the kind of approach you would expect from a die-hard TC&Cer (now in English), epoxying together bits of Chinese petrochemistry and metallurgy. I don’t feel a connexion with History when I do that (even if actually I often think about labor law and global economics when fiddling with stuff produced on the other side of the planet).

So let’s write on the blank, cheap and chic. For the chic part, you may use a fancy white ink (you should, because the cheap stuff looks like crap) and an even fancier nib. 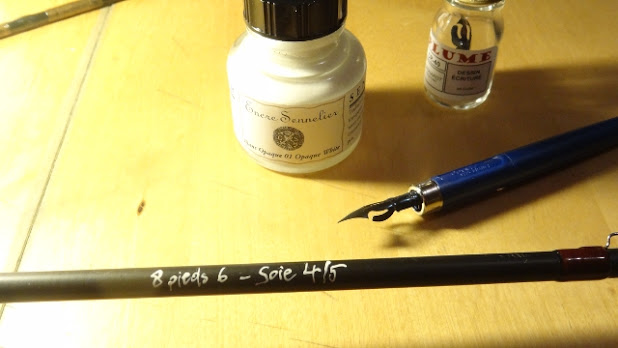 Ink: Sennelier 01 opaque white (a French excellent calligraphy ink). Nib: Leonardt CR40, rather fine, and soft (which is important not to scratch the blank).

Then comes the hard part: something to say (not that hard), somewhere to put it (easy), and some penmanship (hard). Above you see a piece of scrap blank/rod, on which I allowed myself a fit of hysterical invention. 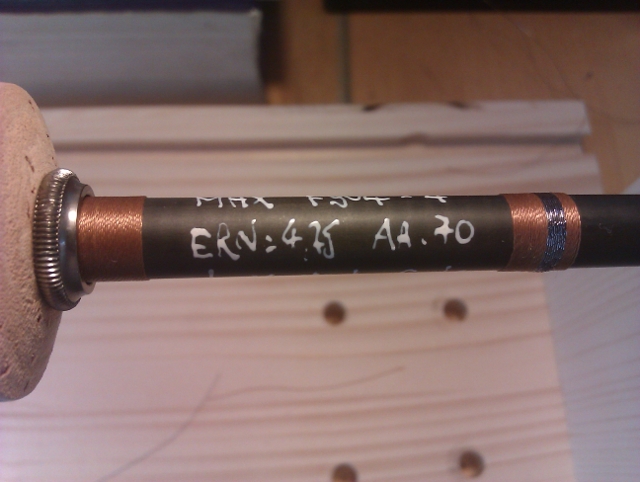 I very much prefer to read CCS data on a rod. Length is kinda obvious, and line rating… err, it’s just bad poetry.

Eric would say (he’s my favourite obsessional / healthily paranoid): you’d better measure that shit yourself and not trust the manufacturer. He’s right, obviously, many manufacturers take us for absolute morons. And you wouldn’t write something false on your blank. And that is precisely the point: CCS data actually are capable of being true or false. Writing “5 wt” is something else: the expression lacking proper meaning, it can be neither true nor false. Like poetry, but ugly.

(Of course there’s much more to a rod than ERN and AA, but it’s as good a start as any, and much better than most.)

The problem with the above is that it ended up unsatisfying. Proportions are wrong, it’s crowded on the grip. It doesn’t work. Good news: white ink is just a nice guy. While wet, you just wipe it out with a wet cloth. If dry, scratch it with your nails. If you don’t have nails, you’d better have a girlfriend. So you can go dip your nib and be wrong like 200 times, it doesn’t matter: wipe, repeat. Repetition takes out a lot of pressure, which is good for a nice lettering.

you can have a rod name, like a pen name but for rods.

Specs and a couple of wraps:

Carp and mullet on the fly are definitely high in my bucket list. I know where I could get perfect conditions and even first class friendly advice, but alas none of it closer than a good 10 hours drive. I guess I’ll have to make it happen by myself.

Meanwhile, I dream about carp on the flats. And flats I can actually drive to, mind you. Boy, I need to do that.

Who needs the Caribbean sea?

His Lordship, obviously, was less than pleased by the fashion sense of Master Bardolph. But he would be the first to admit that Bardolph was a jolly good ghillie, and no one was quicker with the gaff.

A sneak peek from my next build: a sweet sweet 9’/4wt, on a MHX blank. Her big sister, the 9’/6wt is my favorite toy on the lawn, and quite the fishing tool also, but in most situations I find myself involved in, a 4wt would be better suited.

I’m prepared to fall in love with this joy stick. Here’s a sneak peek of the build in progress

Unrelatedly, I’ve been training on the lawn this week. Three 2h sessions. My leader was none too happy about it.

Am I trying too hard?

Actually, I think I invented a new kind of wind knot. It’s cute in a way.