If you’ve followed this blog for a while, you know that I’m trying to  open my son to the wonderworld of fly fishing. He had some fine moments on the 6wt recently, so I decided this was the perfect excuse to actually do what I had planned for long: a 6’6 3wt. Here’sthe story.

A long ago I had built an ultra light spinning rod out of a fly blank I had bought for a tiny sum on the auction site. That was before the fly bug caught so badly on me that everything spinning I passed to my son as early inheritance. 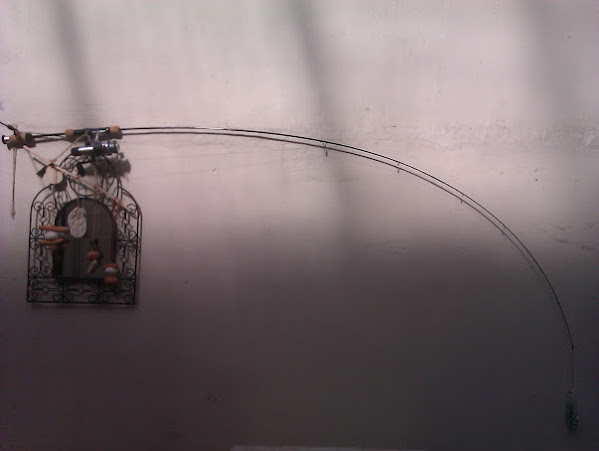 What made it special was the CCS measures, that’s why I bought it in the first place. Hey, ebay sellers, you’ll sound less cheesy with the no name blanks you call “fast” when you’ll start to CCS them. It’s fast and easy, and I bet you’ll sell more. At least it worked on me, and in passing let me thank Mr Roger Penrose who sold this to me. He’s quite a decent guy, and the only seller on the whole ebay honest enough to spill the numbers. The others are either CCS-illiterate, not willing to spend the 5 mins it takes to measure a blank, or happy with the marketing bullshit and willing to call fast any noodle they fancy.

A fly blank is never too fast when you want to make a spinning rod out of it. I wanted: 1. cheap 2. fast 3. light, and with this blank I had a triple check. Bought it. Built it. Fished it. So far, so good.

Then fly fishing happened. I always had in the back of my mind the notion that this little blank was too cool to let go, and that I just needed to build one as a proper 3wt. Except it didn’t show up any more on auction. So one day I got tired to wait and turned to the unsuspecting piece of carbon and said:

know what motherf#cker? Imma get medieval on your ass.

The result was like the process: ugly. It’s probably impossible to extract a clean painted blank out of this. 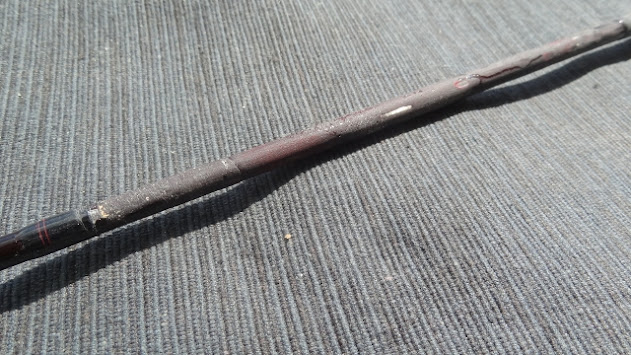 Plus, as the lazy bastard I am, I didn’t want to take everything out, paint, etc. and build from there. As it happens, I’m also very fond of the Tiger Eye color of this blank and wanted to keep it as much as I could. My main problem was that spinning grips and fly grips are not located at the same place on a blank, so the mess above would show for a good 10 cm above the new grip. The good news was: I know how to make a kind of Tiger Eye replica out of embroidery thread.

The rebuild went relatively well except for one part.

I used Batson light wire guides, and found them quite nice, and definitely light. After the build, the bare blank action was softened a little, but just the right amount to make it nice to cast, no back bounce, no heaviness. I don’t know how well they’ll age, since I do a lot of lawn and it’s known to be hard on the guides, but so far I’m enchanted.

For the grip, the idea was to make it small because 1. that’s what you do on a 3wt and 2. it will be my son’s training rod. I had a moment of doubt about proportions 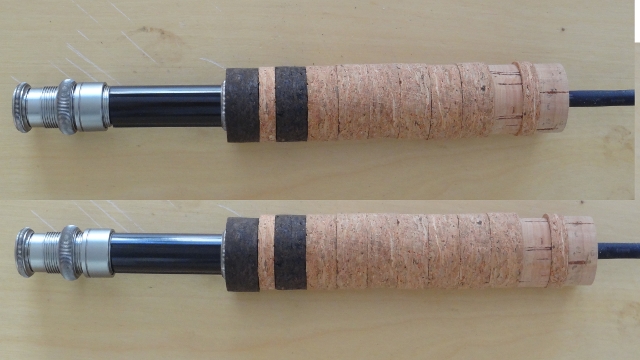 Then I decided for the shorter, following my brain against my eye. After turning, I found the result quite pleasing. 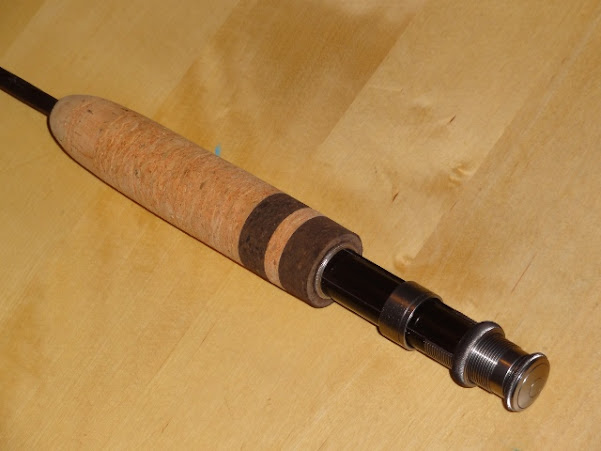 Hardware is Batson’s U3SKC-SG with a rosewood insert, a classic I already used on my 6wt, nice and relatively cheap. I wrapped up the rod with Rust Polysheen I intended to use without CP, for a really nice blend in the blank’s color. 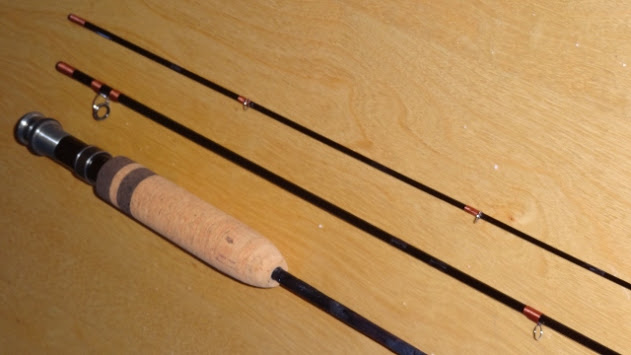 The only thing missing here is the long wrap in front of the grip. Doing it is trivial, but long finishes are a little tricky. Especially with Flex Coat. I did a first try, it ended up wavy, so I sanded it with 600 grit, then second coated it, but the result somehow turned an absolute mess. Just for fun I tried to add a third coat of Permagloss. You never know. 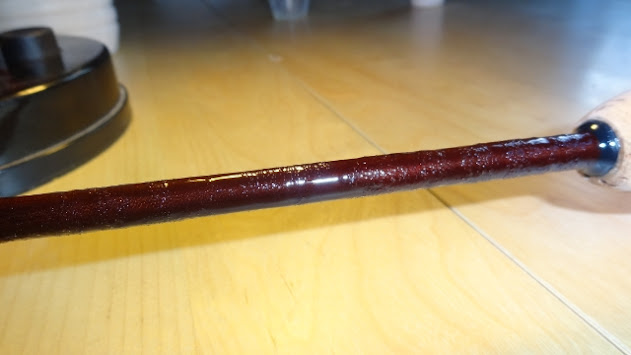 I’m not necessarily adverse to let something ugly but full functional on a rod, that’s part of the TsC&C way. But the very point of that wrap was cosmetic, so ugliness here is a functional fault. I resolved to just get medieval again. 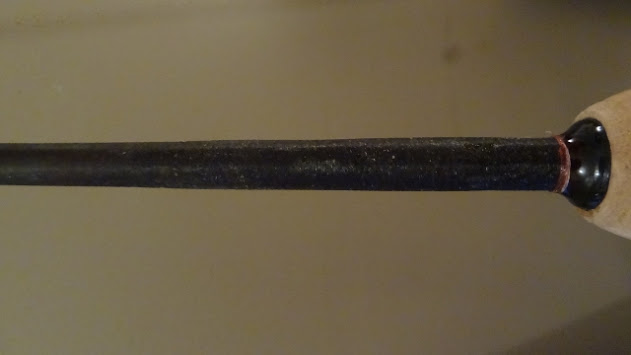 I guessed I could just leave the ramp for a blend in the new finish. I went for a different approach. First a coat of Permagloss on the blank to get an even base. Then soak the thread with PG. It will get you rid of the bubbles without hassle, being much thinner that FC. Then 2 big fat coats of FC to get that glassy look epoxy finishes are all about. 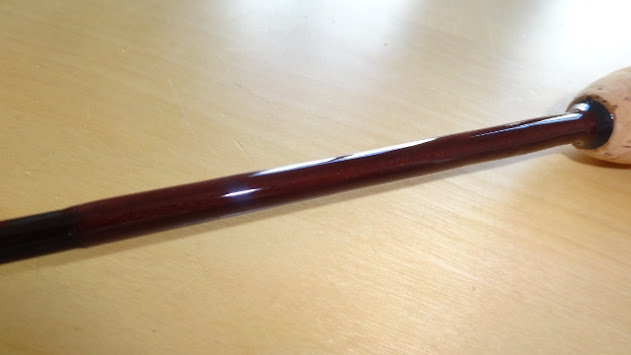 Yup. Here we are.

And that completes the build of my kickass 6’6 3wt (say that with Weilenmann voice). Let’s proceed to rodporn: 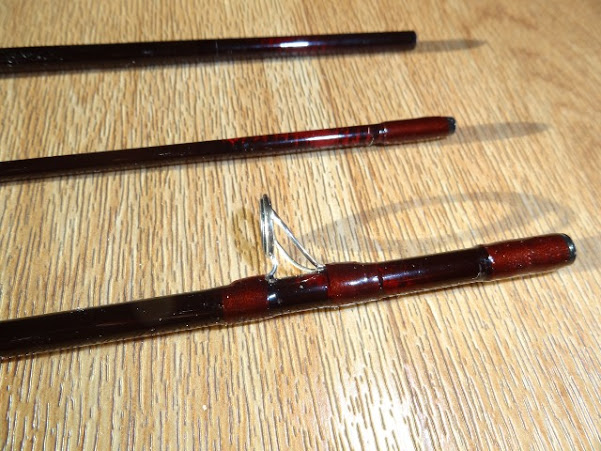 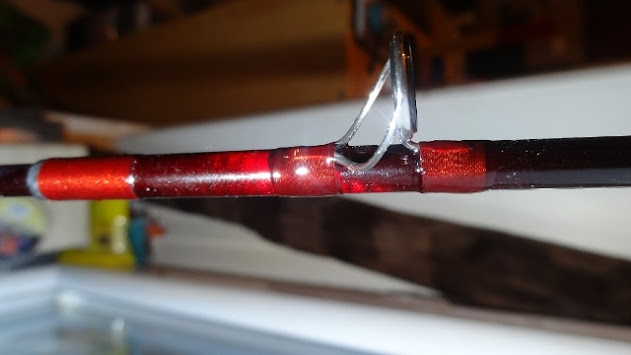 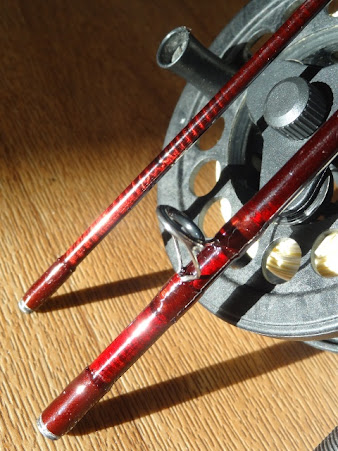 I love the tiger eye finish. Stripper is Fuji LNAG 10. 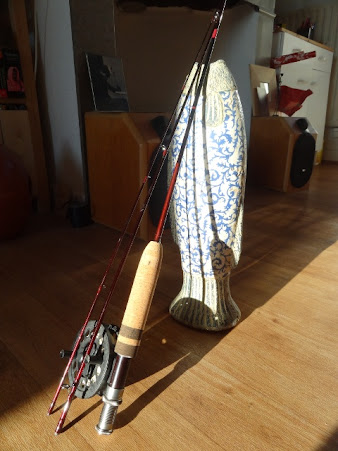 Last thing was to give it a name. This one has a special dedication to my good friend and promoter par excellence of rod building in France, Rodhouse’s godfather and Grand Commandeur of the armed faction of the Briton Asceticism, namely his Lordship Goulven the First. 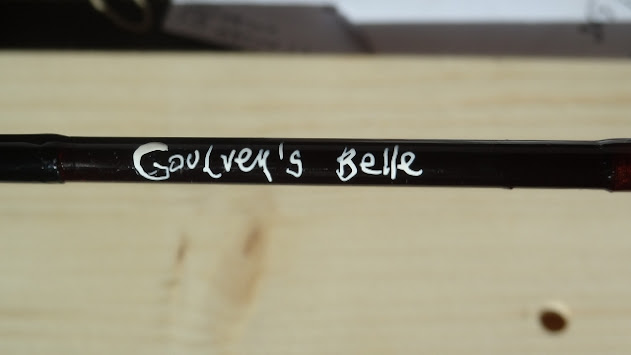 I’ve tested the thing for an hour yesterday. Oh boy, it rocks. I had bought a Barrio GT140 3wt for it (they’re on sale, don’t let the idea that a distance 3wt is a stupid idea deter you, it’s a fucking fantastic line. £18!!). What a nuclear powered combo… Does 20m+ tight loops easy. Handles the wind. Does a roll cast. Is precise. Weights nothing. I just love it.